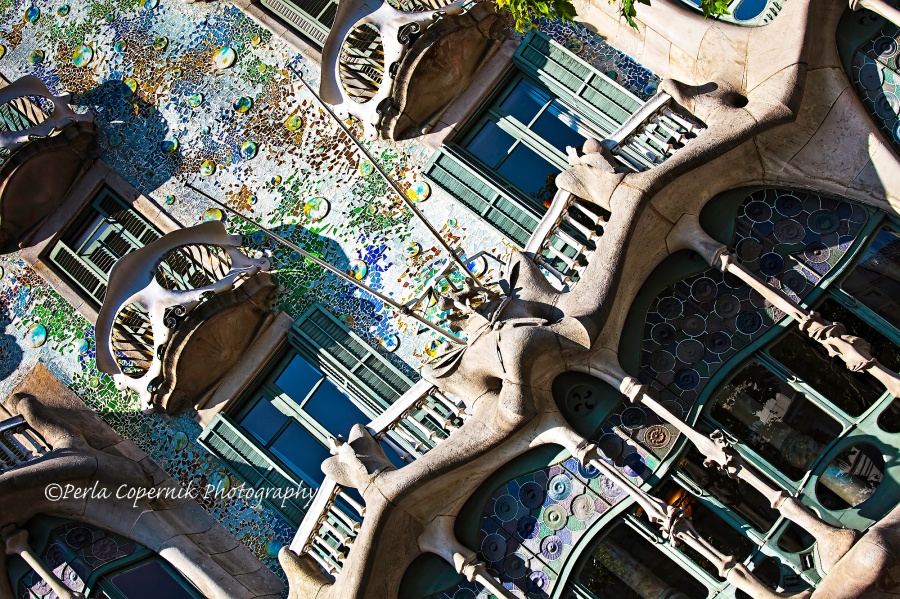 Since the very beginning, even before the actual word was coined, architecture has been influenced by nature.

Guiche at the Palau de la Musica Catalana (Palace of Catalan Music), built by Lluis Domenech i Montaner. It opened in 1908. It is one of the most representative buildings of Catalan Modernist style.

Whether leveraging existing resources like caves to protect ourselves from the elements, to using the universal laws of physics that govern everything in this world to build the magnificent buildings, temples and monuments we so much enjoy visiting, one way or another, nature has always been present. 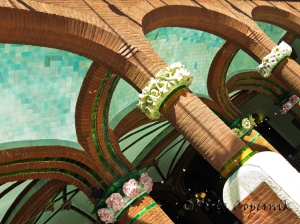 Although throughout history men have used, for symbolic purposes, representations of flowers, plants and animals in different art forms, it was not until the late eighteen hundreds that a new movement began to emerge. This style had nature itself as a muse.

This movement had different names depending on which European country we are talking about. Perhaps the most well-known name is Art Nouveau, but it is also known as Symbolism, Decadence, and Jugendstill – Jugend was a cultural weekly publication that  soon became a style-setting icon and launched the German Art Nouveau movement, named Jugendstil after the magazine.

The Lleo Morera House was built by Lluis Domenech i Montaner between 1902-1906 with an abundant display of floral ornamentation. The name, Lleo Morera, is not from the name of the original owners but rather the lions (lleo) and mulberry trees (Morera) seen in the decorations. Roof detail

In Barcelona this period was called Catalan Modernisme, and it began as a search for a national architecture, which is the title of an article by Luis Domènech i Montaner, the actual founder of the movement in Spain.

At this point you’re probably asking really? Yes, really! We normally think it was Gaudí, but although Antoni Gaudí is the one that takes this movement to its most glorious moment, it was Domènech i Montaner (1849-1923) the one that defined the architectonic Art Nouveau in Catalonia. In his article “En busca de una arquitectura nacional” (In search of a national architecture) title that I borrowed for this post, he explains how he was planning to develop a modern architectural style reflecting the national Catalan personality. 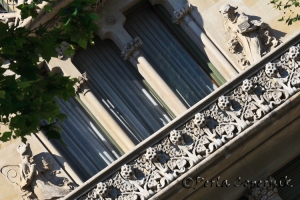 It’s important to understand that the whole movement in Europe had as an objective to create a unique individual style by moving away from the traditional heavy architecture that characterized the two previous centuries with the imitation and revival of old historical styles. This was accomplished by developing new architectural repertoires, decorative elements and techniques using nature as inspiration and an array of different high quality materials such as glass, marble, colored stucco, majolica, hand-painted tiles and metal applique. Besides architecture, these features were found in decorative and applied arts; stained glass, ceramics, iron and other metals, and furniture. 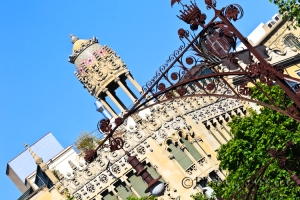 The lleo Morera House seen from across the street

Needless to say for a travel photographer like me who is fascinated by architecture –among many other things- these buildings were a “photographer’s feast”. With limited time to explore I focused my “photo safari” on the famous Barcelona’s district know as “The Eixample” Catalan for extension. The best way to discover Modernist Barcelona is just to walk as much as you can through the many streets that are part of this district.

So I began my walk at Plaça de Catalunya (Catalunya Square). The plan was to see as much as I could walking through “Passeig de Gràcia” towards “Avinguda de la Diagonal”, and finish my day at the Temple Expiatori de la Sagrada Familia. I should say that almost every building on that avenue is incredibly beautiful and I shot pictures of each one of them, windows, balconies, doors, every single detail but nothing that I had not seen before in other European cities. Now when I arrived at the end of the first block, I finally saw something that I had never seen before, the first modernist building of the avenue the Casa (house) Lleó-Morera built by Domènech i Montaner. This beautiful house stands on the southern corner of the block known as the “mansana de la discòrdia” (block of discord), where the Casa Amatller, by Puig i Cadafalch, and the Casa Batlló, by Antoni Gaudí, are also located. The locals gave this prime property in the heart of the Eixample that name due to the very different styles or should I say modernist approaches of the three outstanding buildings. After taking many pictures of the different details using a 24-105mm L Canon lens for perspective and a 70-200mm L Canon for details, I moved on to the next building, the Casa Amatller.

Casa Amatller (Amatller House), built by Josep Puig i Cadafalch. In 1898 Antoni Amatller bought a house on Passeig de Gràcia in Barcelona and commissioned Puig i Cadafalch to redesign it as his family’s residence. The house combines the neo-Gothic style with a ridged façade inspired by houses in the Netherlands

The refurbishing of this building was commissioned in 1898 by the Amatller family to another great Modernist and a disciple of Lluís Domenèch i Montaner: Josep Puig i Cadafalch (1867-1956). The architect based his design on the typical Catalan mansion and incorporated Germanic elements. In the case of the Casa Amatller of Barcelona, the basic layout is the typical urban Gothic dwelling.

This means that what is really a block of flats looks like a single palazzo, an impression accentuated by the delicate porticoes on the balconies on the first floor. The Germanic element is the bold ridged cornice, highlighted with ceramic tiles.

Antoni Gaudí undertook a radical refurbishment of a building in Barcelona’s Passeig de Gràcia dating from 1875 to create one of his boldest works. Gaudí’s imaginative efforts were key to the development of the project, as was the decorative work of the artisans who collaborated with him between 1904 and 1906.

Right next to the Amatller house is Antoni Gaudí’s Casa Batlló, for me far away the most beautiful of these houses, the whole house is like a sculpture, and the building, either on the inside or the outside, offers an infinite number of photographic opportunities. This house, which will get its own post, clearly shows Gaudí’s evolution towards an organic style of architecture based on the observation of nature.

Casa Batllo view from the second floor, the organic structure of this magnificent house (my favorite) comes to life when we actually enter it.

Still in Passeig de la Gracia and right across the street, another one of Gaudís’ masterpieces was waiting for my camera. The famous Casa Milà, also known as La Pedrera (the stone quarry), which many consider the culmination of Antoni Gaudí’s career.

Built by Antoni Gaudi for the Mila family between 1906 and 1910. The Pedrera or Mila House is one of the Gaudí’s residential buildings and one of the most imaginative houses of the history of the architecture, this building is more an sculpture than a building.

Comissioned by Pere Milà as a residential block, the building was tailored to the new social needs, without forgetting his main source of inspiration: nature and organic forms. Built between 1906 and 1912, the Casa Milà occupies an entire corner of the Passeig de Gràcia. The curved, sinuous forms are the main elements inside and outside and its façade resembles the moving sea, the waves interacting with the seaweed-motifs on the wrought-iron balcony railings.

The Casa Milà’s façade resembles the moving sea, the waves interacting with the seaweed-motifs on the wrought-iron balcony railings. The large stone blocks are a type of skin that covers the skeleton of a building free of load-bearing walls.

Once I was done with Casa Milà I began the long walk through Avinguda Diagonal and other streets towards the Temple Expiatori de la Sagrada Familia, one of the things on my “must see before I die” list.

Although I never stopped taking pictures of whatever caught my attention, one particular house, made me stop and dedicate a little more that just a a couple of pictures.

Casa Macaya, another house designed by the architect Josep Puig i Cadafalch, built in 1901. The façade is basically finished in white stucco.

Later I learned this house although very different to the previous ones, is also a modernist relic, it’s the Macaya House. Built in 1901 by Puig i Cadafalch, this house has a white stucco-finished façade decorated with baroque-style sculpted stone around the windows, the balcony and the asymmetric platform of the entrance hall.

Finally when I though my legs were going to fall-off I saw the towers and cranes of The Sagrada Familia. What can I say….it was a breathtaking experience! Because this unfinished masterpiece deserves its own post as well, I will only say that The Sagrada Família is probably Antoni Gaudí’s best-known work and has become an undisputed symbol of Barcelona. 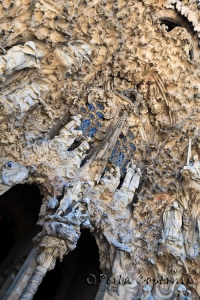 The foundation stone of this colossal modernista church was laid in 1882, and building work is still progress. Although the architect Francesc de Paula Villar was originally commissioned to carry out the Sagrada Família’s project, just a year later he was replaced by the young Gaudí, who devoted himself fully to the task until the time of his death in 1926. This entrance, known as the Nativity façade is the only one Gaudi saw almost completed.

The unfinished, forever in construction interior of the Church of the Sagrada Familia

Extravagant, ambitious and controversial, this unique modern temple has been under construction since 1882, and is expected to be completed by 2030…..will we have the opportunity to see this masterpiece finished while still in this world? Well only time will tell…

Closer look at the interior of The Sagrada Familia 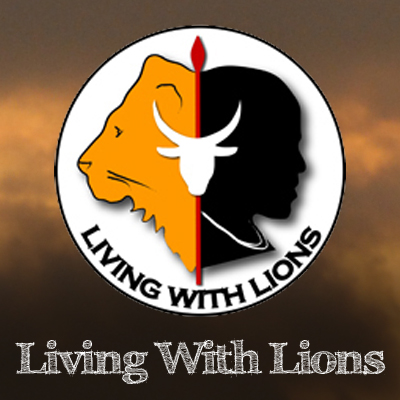