Although the snake does not fly, it has caught the hornbill, whose home is in the sky.

Apparently not enough, especially in some African countries like Ghana and Cameroon where uncontrolled hunting and habitat degradation is decimating the hornbill population.

If you don’t know what hornbills are, I encourage you to read my previous two posts about these spectacular birds. Nuts about hornbills I talks about the evolution of hornbills and the second post, goes over the natural history of these birds, particularly their breeding behavior and peculiar nesting habits which highly depends on healthy forests. 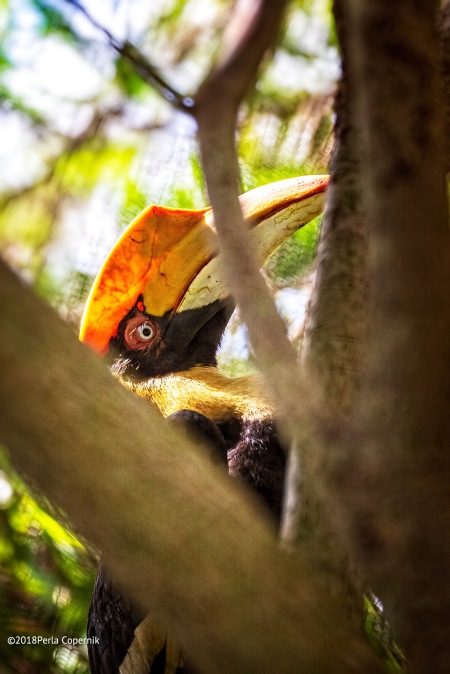 The truth is that hornbills are extremely threatened not only in Africa but in Asia as well. Forest destruction is rampant, and hornbills rely on the availability of natural tree cavities for reproduction. Most species also depend on fruit availability as their food resource. Any loss of habitat means the loss not only of breeding sites but also of food resources. Poorly planned human activities within forests, coupled with explosive population growth and indiscriminating exploitation of natural resources have considerably altered the environment resulting in a massive depletion of forest resources and hence of hornbill habitat (Pooswad p. et al. 2013).

If that is not enough, a new study published this year in Biological Conservation (Holbech, L.H. Et al. 2018) states that the five largest species of the nine hornbills known to Bia Biosphere Reserve, one of Ghana’s few forest wildlife reserves, apparently vanished completely since the 1990s, mainly due to uncontrolled hunting. Similarly, several large hornbills have disappeared from other forest reserves where hunting is widespread.

Another study has found that hornbills, vultures, and eagles are being hunted for bushmeat in Cameroon in much greater numbers than previously thought (Whytock, R.C. et al. 2018).

In Asia, the number one threat to Hornbills is deforestation. The 13 species of hornbills that occur in Thailand inhabit various types of forests, the most important being an evergreen forest with its large dominant trees. Because of the breeding behavior, these trees are critical to the survival of the different species of hornbills (Poonswad, 1995). Hunting is also a major problem in Asia where these birds are not only hunted for food but also to satisfy the never-ending pet trade.

So why should we care?

Well, besides the fact that these are exquisite colorful birds, hornbills are iconic animals  They have an intimate relationship with forest plants as food, and probably coevolved with many of these plants as seed-dispersal agents of primary importance. In ecological terms, hornbills are considered keystone species whose essential service is to move seeds away from parent trees and spread them over a larger area. By doing this they help to regenerate the forest and maintain the diversity of plants and other animals within their habitat.

What are keystone species?

Keystone species are those species whose importance to an ecosystem’s structure, composition, and function is disproportionately large relative to their abundance. In other words, A keystone species helps define an entire ecosystem. Without its keystone species, the ecosystem would be dramatically different or cease to exist altogether. Hornbills are especially vital for Asia’s fragmented rainforests because they are a mobile link species¹. This means that hornbills are capable of soaring over cleared forest areas or plantations, traveling from one forest patch to another to spread seeds across fragmented ecosystems. Other frugivore species—such as rodents and primates—are less likely to link forest fragments since they may find human-caused barriers more difficult to cross. Mobile link species are considered important in the regeneration of ecosystems that have been disturbed by linking disturbed sites to undisturbed source areas where the new organic material may be brought into the perturbed site (mongabay.com April 26, 2010. How hornbills keep Asian rainforests healthy and diverse, an interview with Shumpei Kitamura).

Not all is grim though. There are great programs both in Asia and Africa that are trying to save the most threatened species of Hornbills in the two regions.

One of the heroes of conservation in Asia is Dr. Pilai Poonswad. Her work with the threatened and endangered hornbills of Thailand began in 1978 in Khao Yai National Park. For almost 30 years, she has trekked and camped in forests to study how hornbills live their lives, what they eat, what their breeding needs are and what kills them, in the hope of conserving them. Dr. Poonswad set up the Thailand Hornbill Project to study the biology and ecology of hornbills in 1979. It later became the Hornbill Research Foundation, in 1993. An article (click HERE for PDF file) detailing her work appeared in Science Magazine.

The Thailand Hornbill Project expanded its research into the forests of western and southern Thailand, where it received overwhelming cooperation from the local villagers who previously made a living by selling hornbill chicks stolen from their nests and other wild products. Having villagers helping guard the hornbills and collect research data helps raise awareness about hornbill conservation and nature conservation in general among the local people. If you are interested in helping, nest sites can be adopted allowing the project to fund villagers and researchers that will monitor the cavities and collect nesting data from the hornbills. If you live in North America please contact Eric Kowalczyk at Woodland Park Zoo to make arrangements for a nest adoption (Coraciformes Taxon Advisory Group).

The Philippines has a very high number of endemic hornbills, unfortunately, they are all considered threatened by the IUCN/BirdLife International. Because of this situation, the Philippines Hornbills Conservation Programme (PHCP) was conceived and launched by the Philippines Biodiversity Conservation Programme (PBCP) in partnership with the North of England Zoological Society (NEZS, Chester Zoo, UK) and Vogelpark Avifauna (VA, Netherlands).
The program includes several projects focused on the most threatened species; especially the Visayan, Polillo, Mindoro and Sulu hornbills. The activities conducted by the PHCP include distribution status and ethnobiological surveys, comprehensive education/awareness campaigns, assistance in the development of new protected areas, pioneering habitat restoration and local community involvement,  personnel training, and conservation breeding.

Another great program is the Mabula Ground-Hornbill Project. The Southern Ground-Hornbill (Bucorvus leadbeateri), the largest of all hornbills is a very charismatic bird and is one of the flagship species of the savannah biome. Right now, Southern Ground-Hornbills are considered ‘Vulnerable’ throughout their range in Africa by the IUCN, but within South Africa, they have been classified as ‘Endangered’ (Kemp & Webster 2010) with their numbers outside of formally protected areas still declining. It is even likely that the birds will soon meet the IUCN Red Data List Criteria as being ‘Critically Endangered’ in South Africa. It is estimated that there are only about 1500 Ground-Hornbills left in South Africa, of which half are safe within the protected areas of the greater Kruger National Park. These birds live in social, cooperatively breeding groups that consist of between two to nine birds (mean group size 3.6), but with only one alpha male and one breeding female per group and the rest of the group as helpers. This means there are only an estimated 417 breeding groups in all of South Africa. Data from the Kruger National Park shows that, on average, only one chick is raised to adulthood every nine years. This means that if a second chick hatches, it will die of starvation in the wild nest. The reasons for their decline are similar to the Asian hornbills, which include loss of habitat to croplands, bush-encroachment, overgrazing and plantations, loss of nesting trees, secondary poisoning and electrocution.

The Mabula Ground-Hornbill Project is working trying to stop the decline of these wonderful birds by harvesting and assisting the hand-rearing of the redundant second-hatched chicks that will die in the wild nests. These hand-reared chicks are raised and trained as wild birds by established groups in “bush” training schools. Once they are old enough, the birds are reintroduced back into areas where they have become locally extinct (once the original threats in those areas have been mitigated). The project also provides artificial nests for wild groups in places where there are no or inadequate nests. The group also conducts research on genetics, behavior necessary for a successful reintroduction. Finally, awareness campaigns are coordinated to educate the public about the threats facing this species.

So back to the original question, are we doing enough to protect these incredibly important birds? The answer is yes and no. Yes, there are places where a fantastic job is being done to not only protect the different species but also to help in the process of recovery of these birds by providing artificial nests, working in partnership with the local community and reintroduction of threatened species in the wild. No, because there are other places like Ghana and Cameroon where many of the different species are disappearing at an alarming rate.

A lot of work still needs to be done but at least there is hope for many of the hornbill species in the world.

¹Mobile links are animal species that provide critical ecosystem services and increase ecosystem resilience by connecting habitats and ecosystems as they move between them (Gilbert 1980; Lundberg and Moberg 2003;). Mobile links are crucial for maintaining ecosystem function, memory, and resilience (Nystrm and Folke 2001).